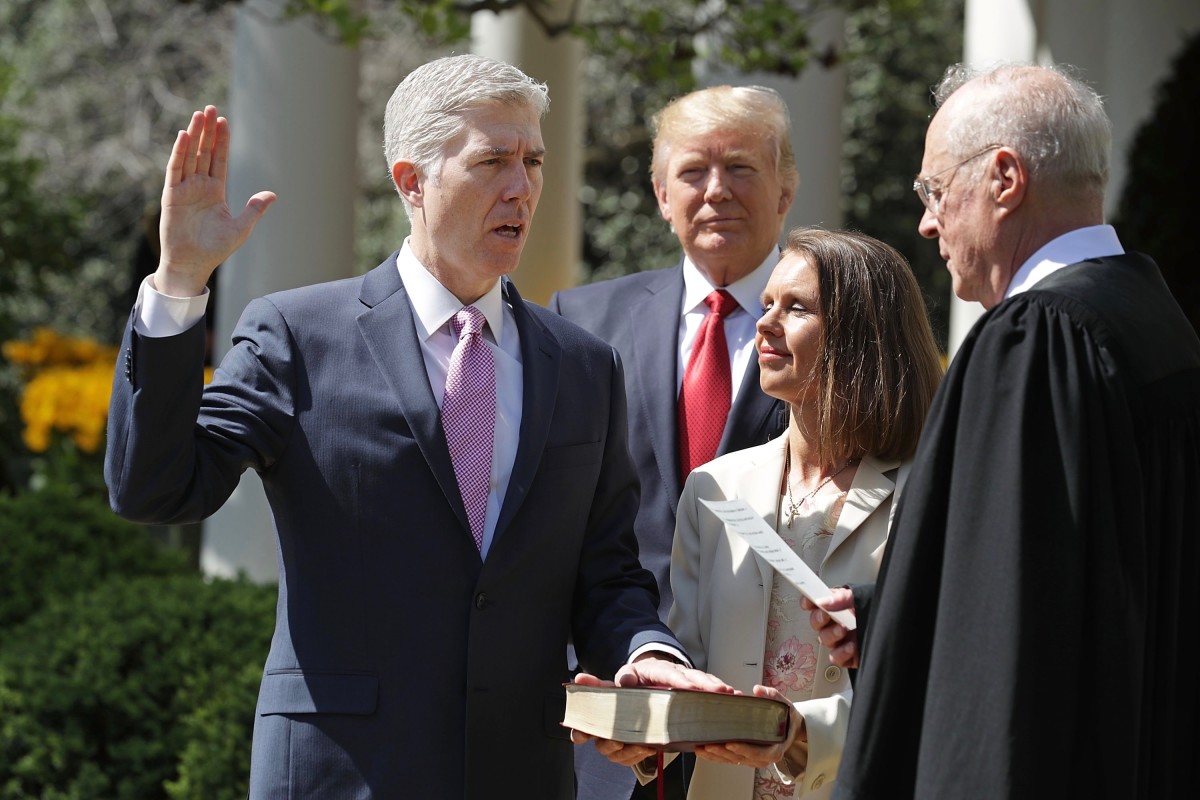 Neil Gorsuch is sworn in as a Supreme Court justice. (Photo by Chip Somodevilla/Getty Images)

A lobbyist with extensive ties to secretive nonprofit organizations served as the “quarterback” for  the successful nomination of Supreme Court Justice Neil Gorsuch, according to records reviewed by MapLight.

Rob Collins, a Washington lobbyist and Republican strategist, claims on his professional biography at the S-3 Group that he worked with more than a half-dozen White House offices, the Department of Justice, the U.S. Senate and more than 20 advocacy organizations to ensure Gorsuch’s confirmation.

The disclosure reveals that the Trump administration is taking advantage of a loophole in U.S. campaign finance law that allows elected officials to coordinate their agendas with nonprofit organizations that aren’t required to disclose their donors to the public. All told, five major “dark money” organizations spent more than $14 million boosting Gorsuch’s nomination.

“By many indications, some of these dark money groups are acting as an arm of the White House,” said Brendan Fischer, an associate counsel at the Washington-based Campaign Legal Center, a nonprofit watchdog. “We’re seeing money flow into politics in ways we’ve hardly seen before, and it’s continuing to flood the very swamp that Trump promised to drain.”

Although campaign finance legislation prohibits coordination among elected officials, candidates and dark money organizations, the laws only apply during federal elections. Coordination to support or oppose Cabinet nominees, judicial nominees, or specific policy measures are not covered by the regulations.

“The reason campaign finance law doesn’t cover this is because it’s written to govern campaigns,” Fischer said. “But there’s little reason to think that a six- or seven-figure expenditure to advance the President’s agenda is going to be any less valuable than a big expenditure to support his reelection.”

The Dark Money Behind Gorsuch

Since the election, the organization has supported Trump’s agenda, launching campaigns to help confirm Cabinet picks including Education Secretary Betsy DeVos and Attorney General Jeff Sessions. The 45Committee paid for a round of ads touting Gorsuch’s qualifications that ran nationally on networks including Fox, MSNBC and CNN.

Attempts to confirm whether Collins is still working with 45Committee — which lists its address as a post office box in a distant Washington suburb — were unsuccessful. Collins did not respond to repeated requests for comment by MapLight.

In the wake of the Gorsuch confirmation battle, America First Policies has continued to support the Trump agenda, spending $1 million to pay for advertisements scolding Sen. Dean Heller, R-Nev., for his reluctance to support legislation that would gut the 2010 Affordable Care Act, also known as Obamacare. The ads “had the blessing of the White House,” according to the New York Times.

Both Collins and Walsh also have ties to the American Action Network (AAN), a leading dark money organization supporting Republican policies. Since 2010, the organization has spent at least $56 million on ads and donations to influence elections. Collins was AAN’s president from its formation in 2009 until 2011; Walsh led the organization from 2011 to 2015. The network has spent more than $5.6 million this year to support Republican health care policies.

The Judicial Crisis Network (JCN), a nonprofit that advocates for the appointment of conservative judges in state and national courts, spent at least $10 million on the Gorsuch confirmation. The network shares a top donor with the 45Committee, the Wellspring Committee, which has distributed more than $24 million in grants to conservative nonprofits since 2008. Wellspring has given roughly $13.9 million to JCN, and also provided $750,000 to the 45Committee –– a third of the money the organization reported raising between April 2015 and March 2016.

Other dark money organizations that spent heavily to support Gorsuch include the Great America Alliance, a pro-Trump spinoff of a super PAC, which spent $3.5 million on the court fight, and the National Rifle Association, which spent at least $1 million.

“I’m trying to figure out what they see in you that makes that $17 million… worth their spending,” he said.

“You’d have to ask them,” Gorsuch replied.

When asked about his views on dark money and disclosure, Gorsuch would only say that he would examine the issues on a case-by-case basis.