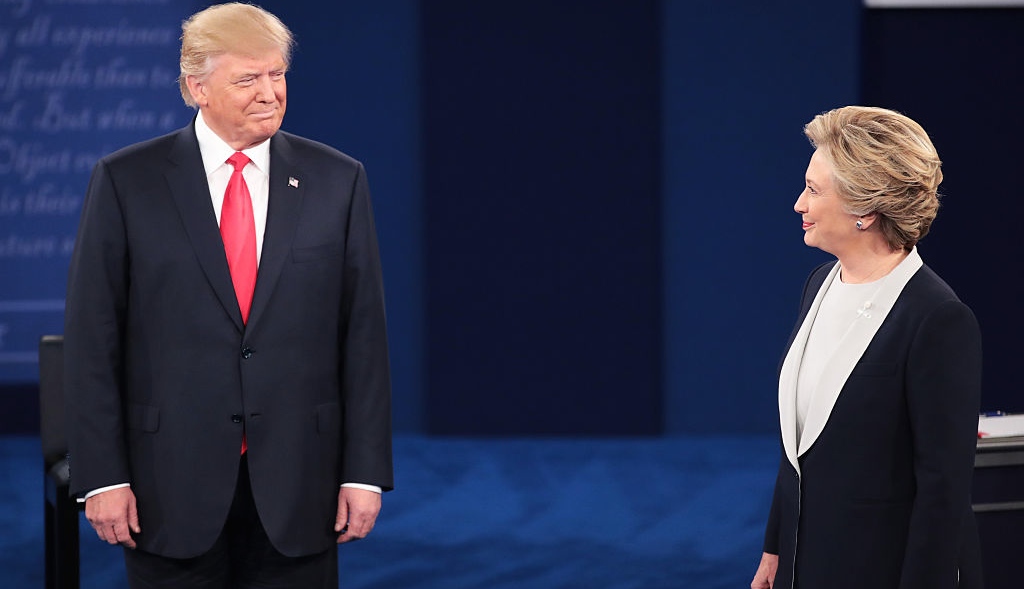 Amid a presidential debate that focused as much on personal attacks as substance, the topic of campaign finance reform finally made a brief, if tangential, appearance in the high-stakes public forum.

Although the role of money in politics has been one of the top issues that voters want candidates to discuss, the topic hadn’t come up until Sunday night’s debate, the second in a series of three forums featuring both of the candidates.

Asked about potential litmus tests for Supreme Court appointments, Democratic nominee Hillary Clinton told the town hall-style audience that she would select justices in favor of reversing the high court’s 2010 Citizens United ruling. The decision, which allowed corporations and unions to spend on elections, has led to sweeping changes to the U.S. campaign finance system that allow big donors to bankroll outside groups to boost their favored candidates.

Clinton said she wants to “get dark, unaccountable money out of our politics,” referring to non-profit organizations that can spend unlimited amounts of money supporting or opposing candidates without publicly revealing their donors. The number of “dark money” groups approved by the Internal Revenue Service has surged after the Citizens United ruling. In the past, Clinton has warned of dark money “distorting our elections, corrupting our political process and drowning out the voices of our people.”

The former secretary of state, however, didn’t speak directly to the issue of super PACs, another byproduct of the Citizens United decision. Super PACs, which are regulated by the Federal Election Commission, can accept any amount of money and spend unlimited funds on elections, as long as they disclose their donors and don’t coordinate directly with candidates.

Super PACs supporting Clinton have raised more than $143 million this election cycle, according to data compiled by the Center for Responsive Politics. Priorities USA Action, the most well-funded super PAC supporting Clinton, has raised $133 million during the current election cycle. While the group has disclosed the sources of most of its funding, it received $1 million in untraceable donations last summer.

The Campaign Legal Center, a nonpartisan watchdog organization, recently accused Clinton’s campaign of illegally coordinating with “Correct the Record,” another pro-Clinton super PAC. The group has claimed the limited scope of its expenditures means it doesn’t have to follow the federal election rules that prohibit outside organizations from coordinating activities with a campaign.

After the debate Sunday night, Republican nominee Donald Trump called Clinton a “hypocrite” on Twitter and said she is “the single biggest beneficiary of Citizens United in history, by far.” Even though Trump criticized the influence of outside groups during the Republican primary race, he currently benefits from the post-Citizens United world.

The billionaire real estate mogul’s campaign has close ties to two super PACs that are working to help him defeat Clinton. The two super PACs were the subject of another Campaign Legal Center complaint. The complaint argued one of the groups failed to follow rules designed to prevent campaign staffers from immediately joining a super PAC, and that the other had improperly shared common vendors with the Trump campaign.

Earlier this month, wealthy donors including Nevada casino magnate Sheldon Adelson announced they would pour tens of millions of dollars into another super PAC and a dark money organization to support Trump. So far, super PACs supporting Trump’s candidacy have raised more than $40 million.

Trump also touched upon money in politics issues at the debate, falsely claiming to be “pretty much self-funding” his campaign, as he has asserted many times over the course of the race. “By the time [the election] is finished, I’ll have more than $100 million invested,” Trump said.

Trump’s campaign has always received donations from individuals. While he did fund a significant portion of his primary race, he never promised to pay the entire bill for a general election race. Recently, his campaign has courted the support of the types of special interest donors he previously lampooned.

It’s unclear if Trump will meet the pledge he made Sunday night to invest $100 million in his presidential bid by the Nov. 8 election. As of the end of August, Trump had given $54 million to his campaign.