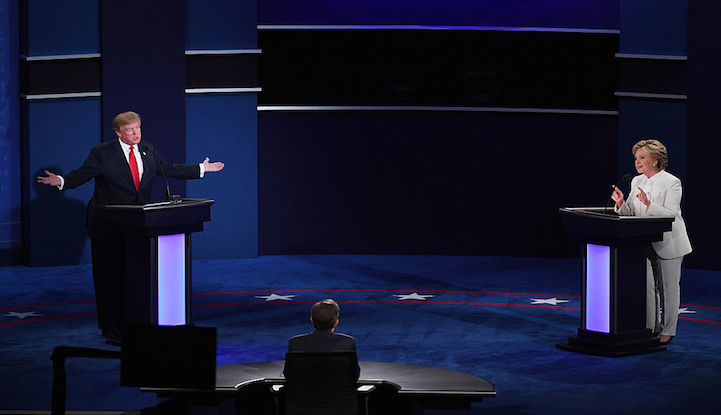 All but ignored during the previous two presidential debates, campaign finance appeared ready to have its moment in the sun during the final televised bout. Within two minutes of the debate’s opening, former Secretary of State Hillary Clinton, the Democratic nominee, raised the issue of the landmark 2010 Supreme Court decision that allowed a flood of money from outside groups to pour into elections.

Clinton promised to appoint justices “that will stand up and say no to Citizens United, a decision that has undermined the election system in our country because of the way it permits dark, unaccountable money to come into our electoral system.”

Republican nominee Donald J. Trump, who attacked Clinton on Twitter earlier this month as “the single biggest beneficiary of Citizens United in history,” passed on the issue, instead using the question to pledge his support for gun rights and opposition to abortion.

The debate encapsulated the two candidates’ approaches to the issue of money in politics during the general election campaign. Across three debates spanning four-and-a-half hours, Clinton and Trump have spent a grand total of one minute and 25 seconds on a subject that an overwhelming number of Americans consider to be a major threat to the nation’s democratic traditions. A poll last year found that 85 percent of Americans believe the system of campaign financing requires either a complete rebuilding or fundamental changes. The two candidates have so far raised more than a half-billion dollars on their presidential bids.

Trump, who launched his campaign with a grandiose promise to pay for his own presidential bid, has used the issue of money in politics occasionally to jab at Clinton, mostly claiming she used her office to encourage donations to her family’s eponymous charitable foundation or her presidential campaign.

The billionaire mogul has sought to tie Clinton to unpopular bankers, claiming during the debate that her advertisements were paid for by her “friends on Wall Street that gave so much money because they know you’re going to protect them.” Meanwhile, Trump has claimed: “By self-funding my campaign, I am not controlled by my donors, special interests or lobbyists. I am only working for the people of the U.S.!”

Even so, Trump, who said last year he “loved the idea of campaign finance reform,” has soft-pedaled earlier critiques of money in politics. He was criticized last month for hiring David Bossie, a long-time Clinton critic who helped orchestrate the Citizens United battle, as his deputy campaign manager. His campaign also is currently the subject of a complaint alleging that two former campaign staffers went to work for a super PAC boosting his campaign without going through a mandatory 120-day “cooling-off” period.

Hacked emails published recently by WikiLeaks show how the Clinton campaign staff turned supportive super PACs into integral parts of her campaign, despite FEC rules prohibiting coordination between candidates and outside groups. A July 2015 campaign memo, posted by a hacker known as Guccifer 2.0., laid out plans for collaborating with Correct the Record, a super PAC created by a longtime ally. The memo recommended that the Clinton campaign “work with CTR… to publicize specific GOP candidate vulnerabilities.”

While the Clinton campaign has confirmed its chairman’s personal email account was hacked, her team has not corroborated the authenticity of the emails that Wikileaks has been posting online daily.

Wednesday night’s forum also featured a pointed question about ethics, with moderator Chris Wallace asking Clinton about her pledge to “avoid even the appearance of a conflict of interest” involving her family’s foundation while she was Secretary of State. Wallace referred to a recent ABC report that found individuals considered “FOB,” or friends of Bill Clinton, were given special attention by the State Department when they offered to provide assistance in Haiti in the aftermath of a devastating earthquake in 2010.

“Everything I did as Secretary of State was in furtherance of our country’s interests and our values,” said Clinton, who chose to talk about her family foundation’s efforts to help millions of people get access to HIV/AIDS medication, rather than explain any potential ethical issues.

When Trump questioned the foundation’s work in Haiti — which was scrutinized by The Nation in 2011 — Clinton said that the foundation had “raised $30 million to help Haiti after the catastrophic earthquake,” adding that “we’re going to keep working to help Haiti because it’s an important part of the American experience.”

Clinton said she would “be happy to compare what we do with the Trump Foundation,” noting that Trump had used his charity’s money to purchase a six-foot-tall portrait of himself. The Washington Post reported that the Donald J. Trump Foundation had spent $20,000 to buy the artwork, and “may have violated IRS rules against ‘self-dealing.’”

When Trump said his foundation’s money “one hundred percent goes to different charities,” Wallace asked him about a report that he had used the charity’s funds to settle a number of lawsuits involving his for-profit businesses.

One of the lawsuits did involve the height of a flagpole at Trump’s golf course in Palm Beach, Florida. The Post found that Trump also used his charity to pay a settlement in New York. Both of the expenditures could violate self-dealing rules, the paper wrote.

Earlier this month, New York’s attorney general, Eric Schneiderman, ordered the Trump Foundation to stop raising money in his state, following a report that the charity did not obtain the required certification to solicit donations there.