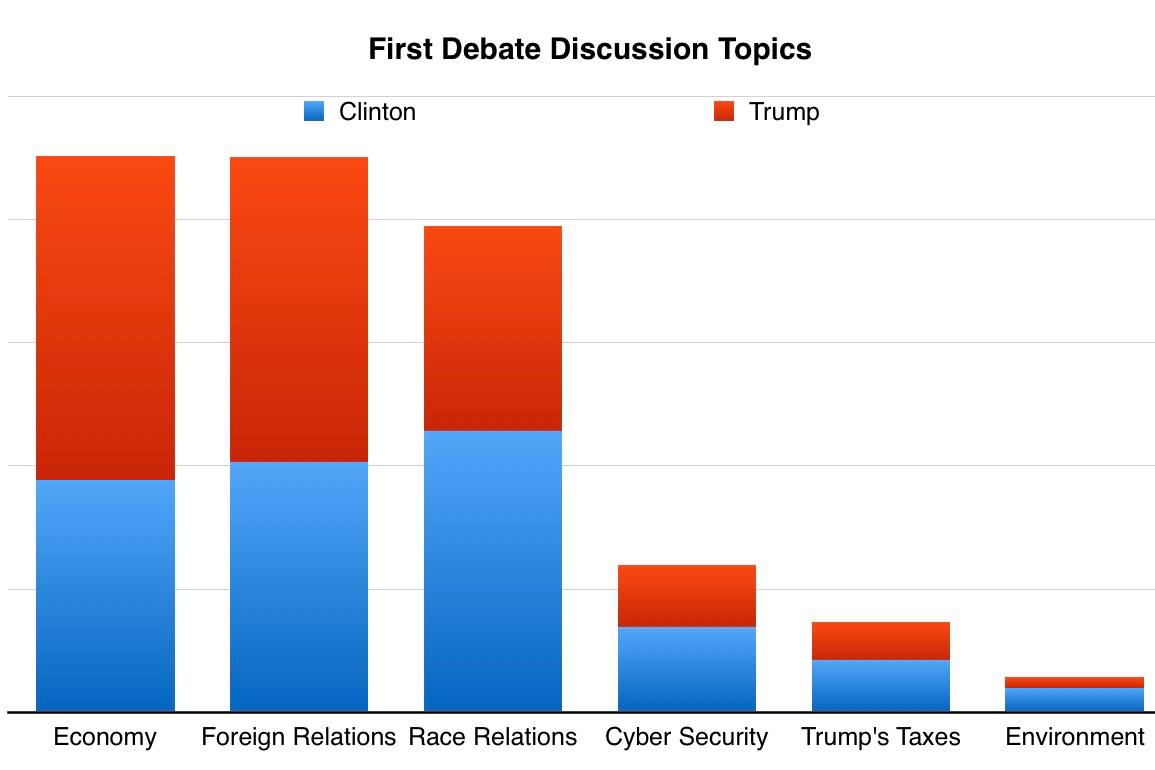 NBC debate moderator Lester Holt cautioned viewers at the outset: “I don’t expect us to cover all the issues of this campaign tonight.” The warning was prescient. Ninety minutes later, when the first presidential debate between Hillary Clinton and Donald Trump was over, the list of topics skipped over was a long one.

Holt didn’t ask any questions about immigration, health care, education, veterans affairs, or Wall Street, after those issues drew considerable attention in the Republican and Democratic primary campaigns. The NBC moderator also didn’t ask about curbing the influence of money in politics — one of few areas of bipartisan agreement.

Polling data released this summer by Issue One, a nonpartisan organization, found voters across the political spectrum consider campaign finance reform one of their top five concerns, and believe there should be new laws to reduce the influence of money in politics.

The push for attention, in the midst of a campaign that’s already cost $1.6 billion, began earlier this month, when a coalition of more than 30 organizations called on Holt to demand the candidates explain “how they plan to make our democracy work for all Americans.”

The groups involved in the “First Debate Democracy” campaign organized social media users to make sure Holt got the message. Last week, they announced that activists had “generated over 7.1 million impressions tweeting at Holt with the hashtag #FirstDebateDemocracy.”

Pressure was applied to the nominees, as well. Former Utah Gov. Jon Huntsman, a Republican, and former Democratic Sen. Bob Kerrey of Nebraska, published an op-ed in Time calling on Democratic nominee Hillary Clinton and GOP standard-bearer Donald Trump to “be a champion of this cause on behalf of a better democracy.”

The closest that the candidates came to a discussion of money in politics occurred when Trump responded to questions about his refusal to release his tax returns. Trump claimed “you don’t learn that much from tax returns … You learn a lot from financial disclosure.”

It’s likely that Trump was referring to the difference between wealth that’s accumulated over many years and reflected on a balance sheet, and income that’s earned over a single year and reported to the IRS. But because of their precision and strict reporting requirements, income tax returns are viewed as the political gold standard for personal transparency.

The Internal Revenue Service, for example, requires taxpayers to account for income sources to the nearest dollar amount; the Office of Government Ethics, the independent federal agency that administers candidates’ financial disclosure forms, requires candidates only to use ranges in describing their income, assets and liabilities. So Trump, who has claimed his net worth exceeds $10 billion, could report income for a book as being somewhere between $1.5 million and $5 million in a disclosure form. In his annual tax return, he’d have to report the exact amount.
The federal disclosure forms also don’t require Trump to cite his tax burden. Clinton noted Trump had paid no federal income taxes during at least two years; Trump responded: “That makes me smart.” Clinton, whose family has made 38 years of federal tax returns public, claimed an effective federal tax rate of 34.2 percent in 2015.